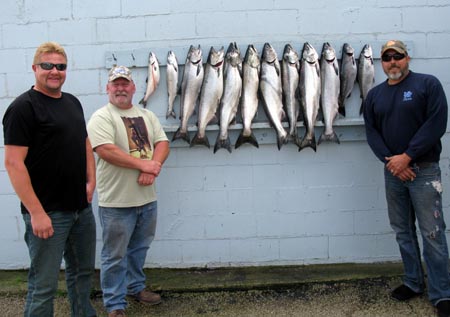 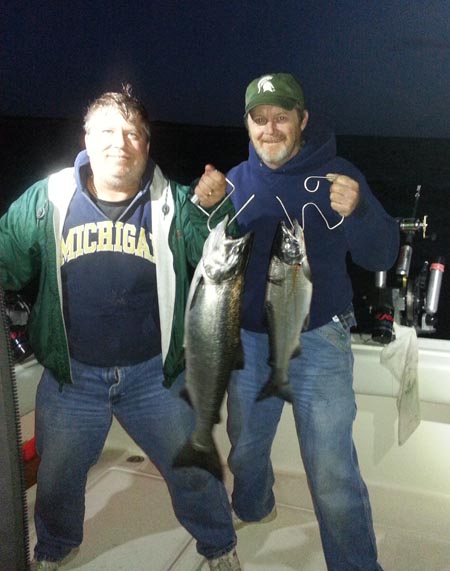 After the strong north northwest winds it was anybody’s guess where to start fishing this morning. We decided to run north of the Point hoping to find a little warmer water. The surface temp was 67 degree and it was 44 degrees down 50 feet. The waves were big but not as big as the weatherman predicted. We only had a few rods set when an out down set at 40 feet with a pair of Fuzzy Bear Mag Skinny Jeans took off. It was on the slider and got away. We hit another fish on the other out down set at 35. It hit a mag EVM Fuzzy Bear spoon sliding above a plug. We lost that one too. A low wire diver out 75 ft. with a 10″ Black Crush Spin Doctor/Green Mirage Strong Fly went next. It was a big King that got into the high wire and broke off, three bites – no fish. We hit a big fish on a 7.5 color core with a Captain’s Choice Green Black Ladder Back plug. Our luck changed and we boated it. We took three more fish on that rod. We took two fish on spoons on our out downs and they were all on the sliders. After daylight we only took one more fish on a rigger. We took a nice King on our chute rigger down 50 with an 11″ White Crush Paddle/Pickled Sunshine Action Fly. We had Spin Doctors and flys on our wire divers early in the morning then switched over to Spin Doctors and meat rigs. The 10″White Crush Spin Doctor/Green Mirage Strong Fly out 75 on a low wire went a total of three times and our other low wire with a 11″ Black White Crush Paddle/Pickled Sunshine Action Fly out 85 went twice. A high wire out 110 with a 10″Chrome Killer Spin Doctor/Green Mile Dreamweaver Meat Rig went twice and the other high wire out 100 went once with a 10″Chrome Mountain Dew NBK Spin Doctor/UV On Ice Big Water Meat Rig. The wind picked up for our afternoon trip. The waves were measuring 4 ft. at the weather buoy. Our guys said the waves didn’t bother them so we headed back up north where we had done so well in the morning. The waves north of the Point were every bit of 4 feet. We put our Fish Hawk probe down and were surprised to see the down temp was warmer than it was this morning. We must have just hit the edge of the warm water because by the time we got our rods set it was 39.9 degree down 40 feet. The waves were so big a north troll was out of the question so we kept trolling south. We took a Coho on a high wire diver out 110 with a 10″ Chrome Mountain Dew NBK Spin Doctor/UV On Ice Big Water meat Rig. The surface temp got colder south of the Point and the Lake started to lay down a little so we turned back north and made an up wind troll. We never had another bite until we started pulling lines. We took a King on a 7.5 color core with a 10″ Chrome Mountain Dew NBK Spin Doctor/Black UV Big Water Meat Rig. I can’t remember the last time I’ve been so happy with two fish. It was a tough challenging night.  We are going to be running charters until mid October and will be posting fishing reports when we have a trip. We use Dreamweaver Premium Strips in all our meat rigs and Morgan’s Tackle copper on all our copper rods.