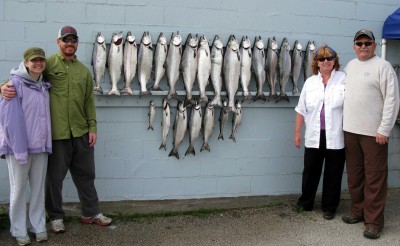 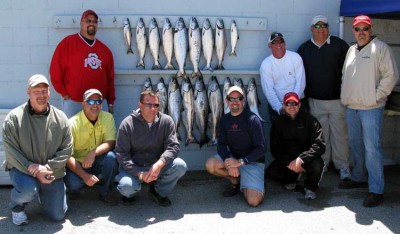 Ran a two boat charter today with the Dreamweaver. We got away from the dock about 6:30 a.m. so we missed the early bite. We fished north off the bank starting in approximately 110 feet of water. Trolled past the Point working 110′ to 130 ‘ and didn’t hit a fish until we turned in the 05’s.  Once we started trolling south the action picked up. Our best rod was a Slide Diver out 135′ with a Dreamweaver SS Gold Orange & Green Tip. A Tin Can Dodger/Pickled Sunshine Action Fly down 90′ took our two biggest Kings. Capt. Shane’s crew on the Dreamweaver fished deeper water and took the biggest fish of the trip on the Tin Can/Pickled Sunshine combo down 170′ in 250 feet of water. A big Paddle/Pickled Sunshine Action Fly was also good down 100’. It was just a slow pick for both boats and the south troll was definitely the best.