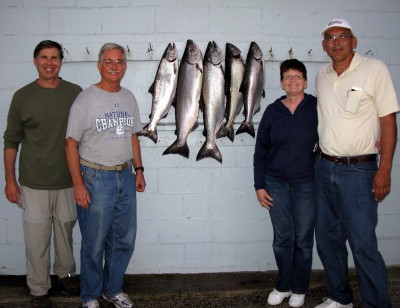 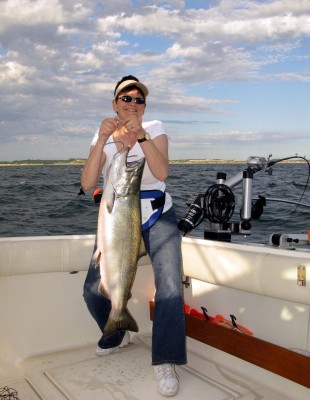 We had an afternoon trip today. We headed up north and set up in 180 FOW in the middle of the 01’s. The break was only down 45 ft., it was colder than we thought it would be, so we trolled in toward the bank. The screen was clean until we hit 100 FOW. We started to mark a few fish and some bait and when we hit 80 FOW it looked real good. We ended up fishing between the bathhouse and the point trying to stay in the 80 ft. range.     The waves had a lot of west on them and it was a tough troll. We hit fish on both the north & south troll tonight. We had 9 hook ups and landed 5 of them including Pam’s big king. Her fish hit a 10” White Crush Mountain Dew Spin Doctor/Cold Steel Big Water Meat Rig on a high wire diver out 130 ft. That fish ran out 830 feet of wire on its first run. We had 6 bites on that combo.  We also took a nice King on a Yeck Copperhead on a 7 color core. We had a pair of glow spoons on an out down set at 60ft. that took 2 fish. 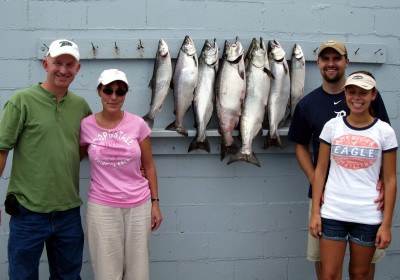 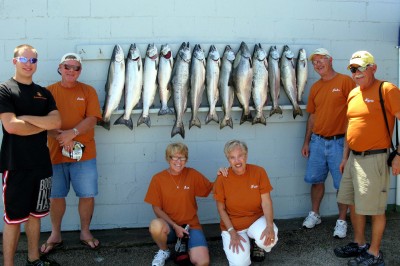 We fished up north on the Bank the last two days. Had a good early bite yesterday taking four mature Kings. The bite didn’t last long, and then it was slow going. We hit a few more fish all on the north troll. There were some boats getting bites on a south troll but not us. Our high wire divers out 140 & 150 with 10” Spin Doctors and Big Water Meat Rigs were our best rods. We took all our fish between 80 & 110 FOW. Today they were biting good until the storm hit. We had an 11” Green Paddle/Pickled Sunshine Action Fly down 70’ on our chute rigger. It went before we could set our out downs. Our out downs with glow spoons set at 50 & 60 ft. both took fish and a high wire diver out 170 with a 10” Glow Blade Blue Bubble Spin Doctor/Blue Moo Big Water Meat Rig went too. We went 7 for 8, all Kings, then the storm hit and shut things down. It was dead for us for and hour or so then the action picked back up. Our best rods were our Spin Doctor/Big Water Meat rig combos. The 10” White Crush Mountain Dew/Cold Steel Big Water Rig out 150’ on a high wire diver went three times. Our other high wire out 170 with the Blue Bubble went again. A Clear Blade Dark Green Tape Spin Doctor/Green Mile Big Water Rig on a 10-color core took a nice King and so did a 10”Black Crush Spin Doctor/Cracked Ice Big Water Rig out 90’ on a low wire diver. Most of our fish came between 70 and 100 FOW. We did hit a couple in 140 FOW when we swung out to make a turn. There were a few pods of suspended bait out there too.