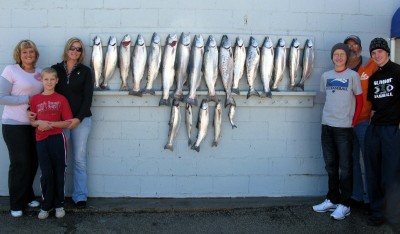 We started out this morning in the 55’s & 33’s and put it on a west troll.  We took a Laker on a 3 color core with a SS Magic Man on the out troll. We turned in the 34’s and took back in. We hit 3 fish on the in troll and took 2 of them. We wern’t marking the fish like we did yesterday so we pulled lines and headed offshore. We set-up in the middle of the 53’s and 44’s west. The surface temp was 53.6 and it was 47.3 at 40 feet. We put it on a 270 and took it out to the 47’s. The water got warmer the further out we went getting as warm as 59 in the 47’s. We turned back east to the 44’s then back out to where we finished in the 46’s. The fishing was fantastic! We hit fish on both the out & in trolls. We took 15 Steelhead and 3 Kings in that water. Our deepest rigger was 45 feet. We were running 3, 5, 7, & 8 color cores and Slide Divers for our high divers and wires for our low divers. Every rod we had out took at least one fish. A Yeck Fireball  out 110 on a Slide Diver went 5 times and a regular size Dreamweaver Glow Pearl Spoon with an Orange Ladderback out 55 on a low wire went 4 times. We had a pair SS Lemon Limes on one out down at 35 feet and a Yeck Fire Frog  at 40 with a Yeck Firefly free sliding on the other. A Fuzzy Bear SOG with Green Glow Tape was down 45 on a 3 color core down the chute.  We had SS Magic Man’s on our 3 colors, a SS Steelie Stomper on one 5 color and a Yeck Fireball on the other 5 color. We had a Yeck Copperhead on a 7 color and a Fuzzy Bear Frozen Veggie on our 8 color core.  They all took fish.

TODAY WAS OUR LAST SCHEDULED TRIP. WE WILL HAVE THE BOAT IN THRU MID – OCTOBER. IF YOU WANT TO GET IN ON SOME GREAT FALL FISHING GIVE US A CALL AT 877 456-3474 AND BOOK YOUR TRIP TODAY. 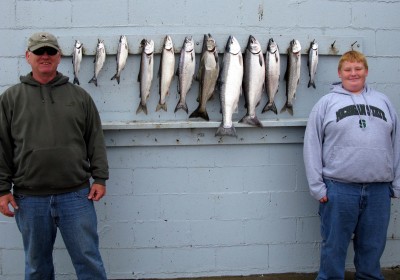 We were planning on fishing up north today but the Coastwatch image showed cold water at the Point. We ended up running southwest of Ludington watching the surface temp. We found 55 degree water in the 54’s and 33’s so we set-up there. We trolled sw and as we got into the 53’s and out to the 35’s the temp dropped to 53 degrees. We worked the top 60 feet between the 55 degree & 53 degree water.  A 5 color core with a glow Bloody Nose was our hot rod. We hit fish on 3 & 7 color cores too. A Pearl Yeck Spoon with ear rings out 80 on a Slide Diver went 3 times. We only had 1 low wire bite on a Spin Doctor/Big Water Meat Rig and we didn’t get the fish.  A regular size Pearl Glow Dreamweaver Spoon with a Red Ladder Back was good out 70 on a low wire. Our best rigger bait was a set of regular size Dreamweaver Pearl Necklace Spoons down 50 on an out down. We kept some small Coho that were bleeding from the gills, better for our crew to eat them than the seagulls.