The fishing is still slow. Don’t really know why. We are marking bait and fish but most boats including us are having a hard time getting them to bite. It could turn around any time but it hasn’t yet. We took six nice fish yesterday fishing southwest of Ludington  in 200 to 500 fow. The biggest King took a plug on a 10 color core. The wind picked up a little today from the southwest so we decided to try fishing up north along the Bank. We had the same crew today and they were game to try something different. We set up in 100 fow and took a nice 4 year old King on a high wire diver as we were letting it out. It got out to 120 ft. and the 10″ White Crush Mountain Dew Spin Doctor/ Big Water Cold Steel Meat Rig fired.  We didn’t have to wait long and the 11″ White Paddle/Pickled Sunshine Action Fly on the chute rigger down 80 took off, another nice 4 year old. Then we boat rode. We tried for some trout later in the morning and picked up one. That was it, 3 fish. Hoping things turn around soon. 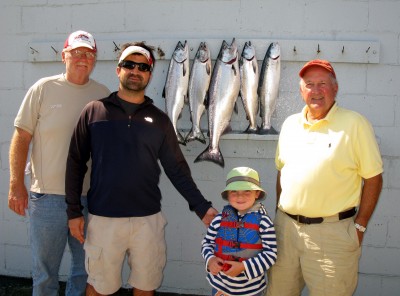 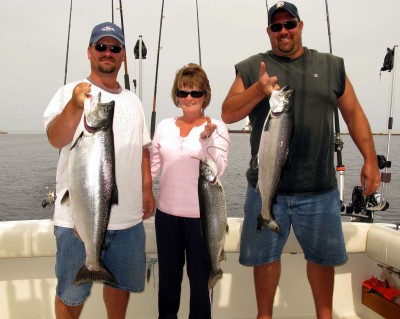 We fished 5 hour trips the last two days. Thursday we went north and it was slow. Again lots of bait and fish but only three takers.  Two of the three came on  high wire diver out 220  with a 10″ White Crush Mountain Dew Spin Doctor/Cold Steel Big Water Meat Rig. We’ve been fishing the Point for quite a few trips and we finally decided to try a different spot today.  We fished out front and a little south this morning setting up in 250 fow. The surface temp was 67.4. It didn’t take long for the first rod to fire. It was a 10″ White Crush Paddle/Pickled Sunshine Action Fly stacked with a glow spoon down 90′. The three year old King took the stack. That same rod went again about 10 minutes later only this time it took the Paddle, another King. We trolled west out to 500 fow getting a couple more hits. No bites on our east troll. When we turned it back  west we hit our biggest fish of the day, a 16 lb. King on a Gold SS Monkey Shine on an 8 color core.