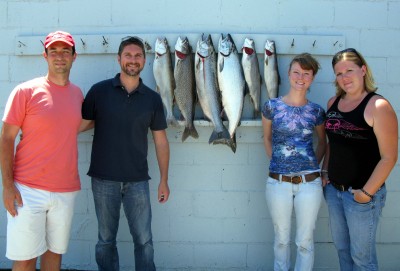 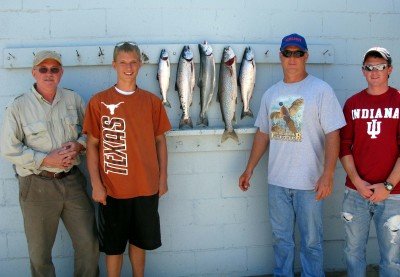 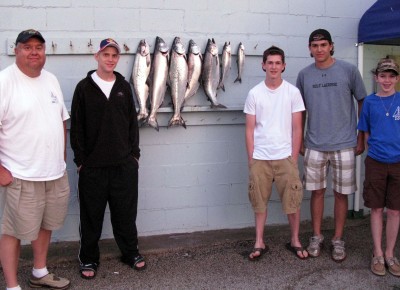 Fished an afternoon trip today.We fished north setting up in the 02’s in 180 fow. Didn’t get all the rods set when a high wire diver fired at 179 ‘ taking a nice King. Worked northwest out to 360 ft. and no more bites.  We turned east in the middle of the 04’s. We hit five fish on that troll. When we hit 130 fow we turned it back west and hit two more. Turned back east when we got out to 260 feet. We hit a couple more before we pulled lines at 8:30. We had one spoon bite, all the rest of our hits were on flashers and meat rigs. Our best rod was a high wire diver out 260 ft. with a 10″ White Crush Mountain Dew Spin Doctor/Cold Steel Big Water Meat Rig. It went three times. The other high wire out 280 took two shots with a 10′  Chrome Green Spin Doctor/Leprechaun Big Water Meat Rig on it. None of the other rods went more than once.  Only one rigger bite, an out down set at 95′  with a 10’ White Crush Spin Doctor/Big Red Big Water Meat Rig. We marked lots of  suspended bait and and fish.  We had to keep checking oour lines do to the sea fleas. They were thick.