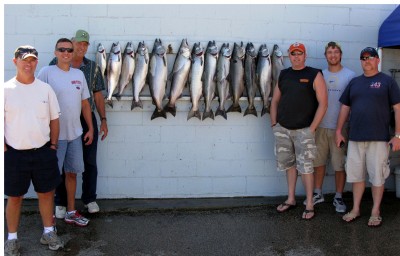 The boat traffic was horrible up north, but he fishing was good. We couldn’t find an opening to set up south of the point. We ran to the 05’s and trolled south with the waves. We didn’t get a hook up on our first 4 bites. Once we got into the 04’s our action picked up. Our wire divers were good again today. We had the same rigs and they were out the same number of feet as yesterday. No action on our chute rigger today but our two out downs were good. We had a Dreamweaver Natural Glow Captains Choice Cut Plug down 75 that went 3 times before it broke off and a 10″ White Glow Blade Spin Doctor/Blue Moo Big Water Meat Rig down 80 on the other. We ran a 250 copper out each side with plugs when we could but they were in more than they were out. It was hard to fish the 90 to 120 foot depths because of all the boats. Today is the worst I’ve seen it this year.  We got in there when we could but mostly fished between 130 & 160 FOW. The south troll was by far the best for us but there were a few boats liking the north troll. 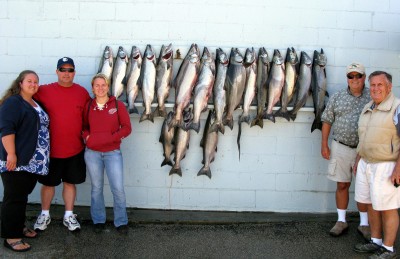 Good fishing up north again today. We set up in the 01’s and in 100 FOW and took it north. Lots of boat traffic made it tough to get any lead core or copper rods out early. We took most of our fish on our wire divers. We didn’t have any spoon bites. When the boats spread out a little we put a couple plugs out on some coppers. The Natural Glow Captains Choice Cut Plug on a 250 took 2 big Kings and a Chrome Red Head Captains Choice Cut Plug on a 200 took 1. We didn’t have them out very long because of boat traffic and steady action on our Spin Doctors and Big Water Meat Rigs on our wires. We didn’t have any rigger bites for the first hour and a half. We took off our spoons and put an 8″ Show Time Spin Doctor/Moo Moo Big Water Rig 65 down on one out down and a 4th of July rig 70 down on the other. We took fish on both of those but never had the chute rigger go all day. Our high wires had a 10″ Glow Blade Blue Bubble Spin Doctor/Blue Moo Big Water Rig on one and and a 10″ White Crush Mountain Dew Spin Doctor/Cold Steel Big Water Rig on the other. They were out 250 feet. The lows were a 10″ Show Time Spin Doctor/Moo Moo Big Water Rig out 165 and a 8″ Blue Chrome Spin Doctor/Cold Steel Big water Rig out 170. They were all going good. It was a slow troll going north and a little faster going south for us.