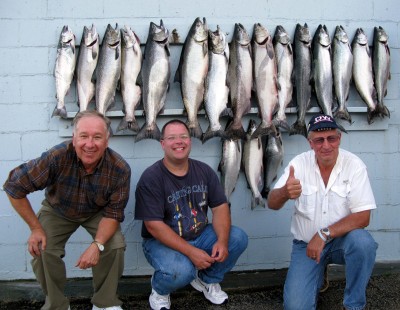 Very good fishing up north this evening. We postponed our morning trip due to rough conditions until this afternoon. Our crew was fired up after waiting all day.  We ran up to the 06’s in 130 FOW and trolled south with the waves. We were trying to keep the speed about 2.5 to 2.4 at the ball on our Fish Hawk but we were faster than that on the north side of the point. Our riggers were set at 85, 95, & 105 on the chute. Our wires were out 300 on the highs & 200 on the lows. We had flashers and meat rigs on every rod. We ran a 300 & 350 copper on each side. They all had 10″ Spin Doctors and Big Water Meat Rigs on them. They each only went once because the action was so good we couldn’t get them back out. Our high wires were hot. We had a 10″ Blue Bubble Slick Spin Doctor/Cold Steel Big Water Rig on one and a 8″ Blue Chrome Spin Doctor/Blue UV Big Water Rig on the other.  We fished between 110 & 150 FOW from the 06’s to 01:50. We hit fish on both the south and north troll. Our crew members were experienced fisherman and that helped. We were done by 7:00 P.M. 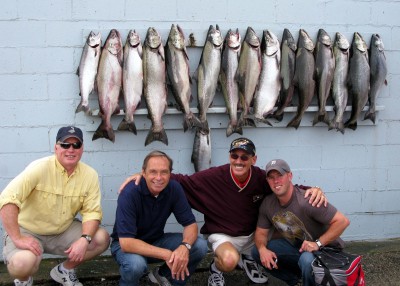 The Lake wasn’t near as rough as forcasted today. We fished north in the same area as yesterday. It ws tough getting slow enough for a good troll with the strong current coming form the north. We had two bags in and were backed right down and still couldn’t get any slower than 2.8 at the ball on our Fish Hawk. Our starboard low wire diver out 100 with a 10″ Show Time Spin Doctor/Blue Moo Big Water Meat Rig took our first hit. The fish peeled out 600 feet of line and would not come in. We were going in and out of gear to help get the fish in when two more rods went. The fish liked the slow speed on the north troll. We ended up losing the fish on the wire. It was foul hooked. We found a scale on the hook when we brought it in. We took it down to the 06’s and turned back south. The bottom temp started warming in the 05’s. We took a nice size King on an all Glow Dreamweaver Captains Choice Cut Plug on a 10 color core. That plug went 3 times for us. We trolled back to the 03’s and only had 2 more bites and landed no more fish. We turned back north in 90 FOW and hit two quick fish. The north troll was definitely our best troll.  All our wires took fish and the chute rigger with a 11″ White Paddle/Pickeled Sunshine Action Fly took 2 fish and we missed another one on it. We were running the Paddle on the chute rigger earler in the season but we haven’t run it for three weeks or more. We ran a 9 boat group charter today for ABC Warehouse and Amana/Whirlpool Appliance. All the boats caught fish. Two boats from our group fished in PM Lake and reported lots of fish  in there. Lie-A-Lot charters stayed in PM Lake and caught the big fish for the day, a 27.7 lb. King. Captain Chucks’s weighed in a 37.1 lb King today. It was caught south of Manistee on a Show Time Spin Doctor and a UV On Ice Big Water Meat Rig.