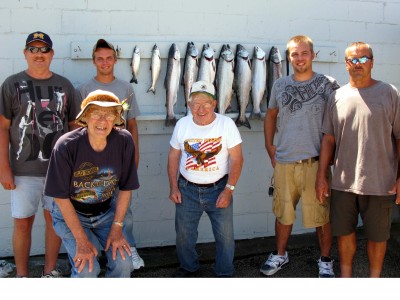 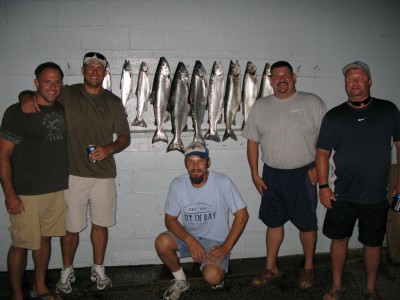 We fished a double  today. Started out in the 02’s in 90 FOW.  We didn’t have much of a morning bite, two hits on a high wire diver out 155 with a 10” White Crush Mountain Dew Spin Doctor/Cold Steel Big Water Meat Rig. That was it. When we hit the 04’s we turned northwest and took it out to 300 FOW then brought it back in to 150 FOW.  The action wasn’t fast, but we did hit some fish. 8, 10, & 12 color cores and 200, 250 coppers all took bites. We didn’t really have a hot bait. Regular size Yeck Lighting on a 200 copper took a couple and a SS Magic Man on an 8 color took two Steelhead. No rigger bites on the morning trip. We started our afternoon trip in 300 FOW in the 02’s and trolled north. We hit a good fish right away on our high wire with Mountain Dew/Cold Steel rig but it got away. Our other high wire out 170’ with a White Slick Light Green Tape/Green Death Big Water Rig was the hot diver on the p.m. trip. It took 3 of our Kings. When we hit the 03’s we put it on a in troll. We had decent action. Our chute rigger down 65 with a pair of regular size Fuzzy Bear Yellowtails went 3 times. The Yeck Lighting took a couple more and a Copperhead on a 10 color core went twice. It’s hard to find the time to get this report out when we are running doubles so the reports might not be real timely when we do run them. 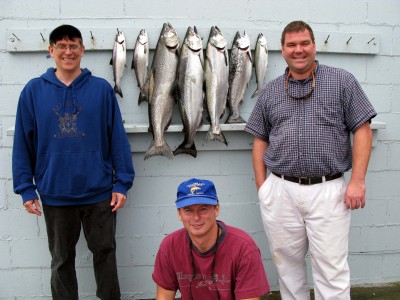 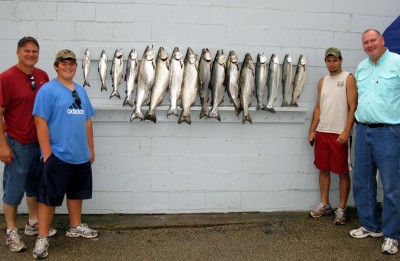