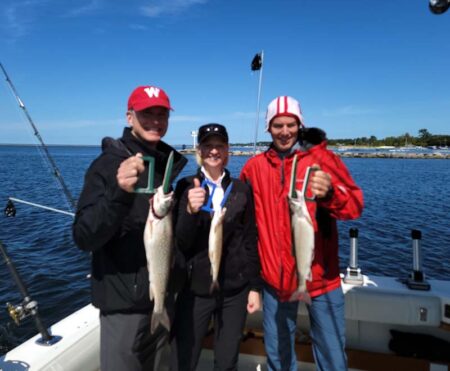 Back on the water. The weather hasn’t been too cooperative lately and neither have the fish. I warned our trip today that fishing has been tough and gave them the chance to back out but they wanted to go. We headed north setting up in 100 feet of water south of the Bath House. The wind was howling pretty good and the waves were from the north. We started setting lines on an up wind troll. We hit a fish in the dark on our chute rigger down 85 with a mag Fuzzy Bear Yellowtail stacked with a regular Fuzzy Yellowtail. The fish hit the stack but didn’t hook up. The picture on our graph looked ok. We were marking some fish an bait mostly near the bottom. It was 57 degrees down 75 feet. We trolled to about a mile north of the Point without another bite staying between 95 and 115 feet of water. We tuned back south and took it out to 200 feet. We marked a lot of bait but not many fish. It was between 9:30 & 9:45 when our 350 copper with a 10″ Kevin’s Girlfriend Spin Doctor/Pickled Sunshine Action Fly took off with a big King. While we were doing battle with it the chute rigger with a Trout rig popped. It was a Trout and we boated it. Then we took a 2 year old King on a 325 copper with a mag Fuzzy Bear Yellowtail. After a long fight we boated the King on the 350 copper. That was it for our action until we took another Trout on our chute rigger when we were pulling lines. We had a hardy crew today. It was cold, rough, and fishing was tough but they stuck it out with no complaints. We use Dreamweaver Premium Strips in all our meat rigs and pull our coppers and cores with Dreamweaver Ninja Boards. 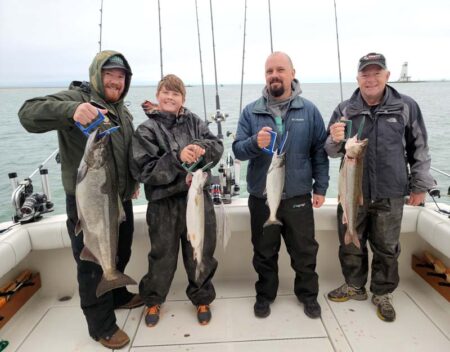